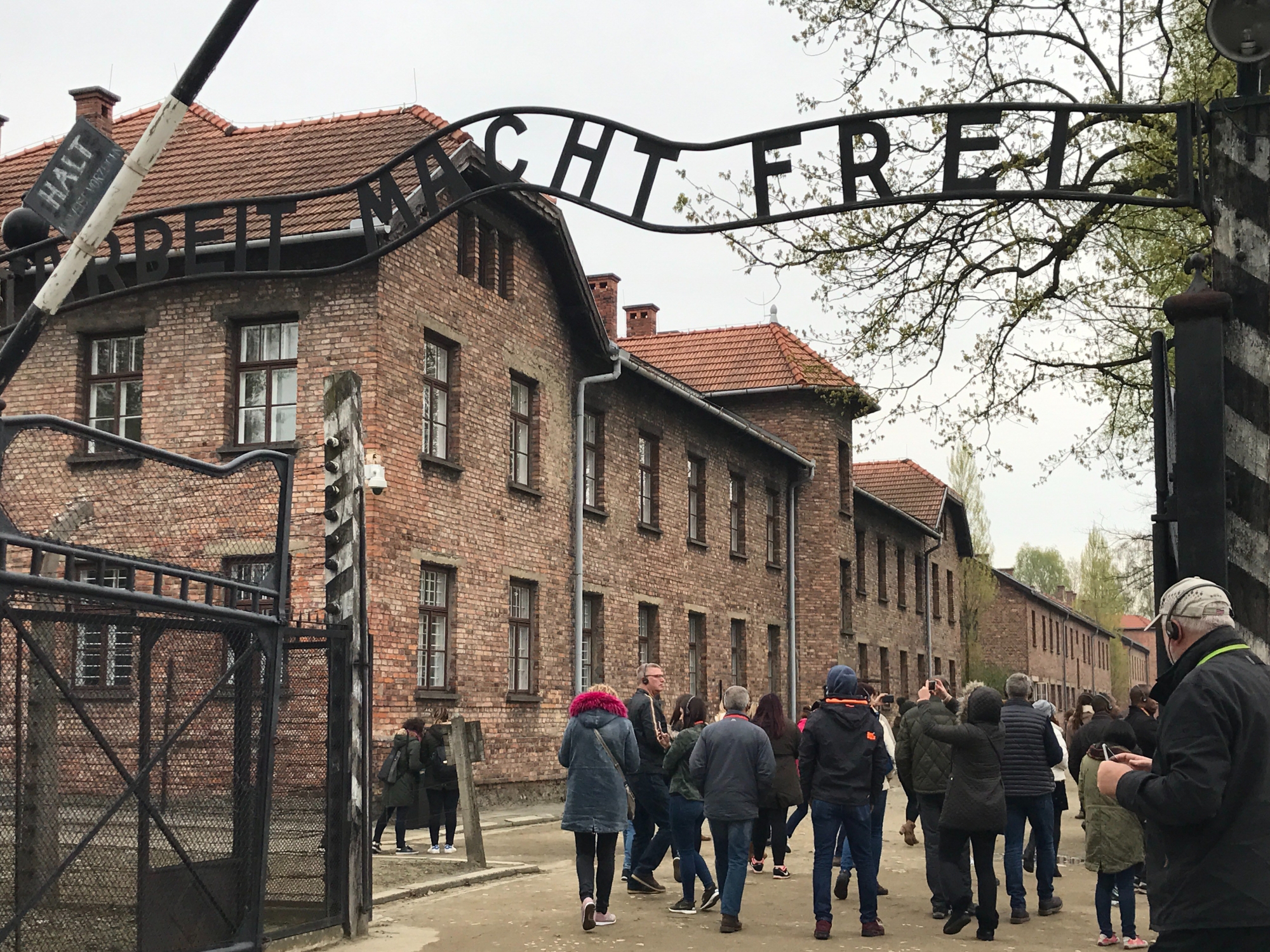 A friend in Vienna asked me if I knew what is written at the Entrance of this infamous place when I told him of my plans in the last leg of my East European trail. We were undoubtedly talking about Auschwitz-Birkenau, the former German Nazi Concentration & Extermination Camp in the Southern Polish town of Oświęcim. The largest of Nazi-built Death Engineering Factories, the site of Jewish Holocaust where an approximate 1.6 million people (90% of them, Jews) were gassed & murdered as a part of their “Final Solution” to the Jewish problem. The ultimate destiny of all Jewish deportations.

Arbeit macht frei, WORK SETS YOU FREE in German, written on the Entrance of Auschwitz I camp welcomed its prisoners into a dubious Labour Camp only to reveal later what was in store for them – misery, horror, distress or any illustration of “suffering”. Had the war not been over, it was the demise of humanity with a silent world standing by as a mute spectator.

Chill runs through my spine when I think of how anyone could be silent about this! Just as the world was silent about the famine of 1943-44 in Bengal under British India that took 2.1 million lives even more quickly than what it took Adolf Hitler to organize a planned genocide of over 6 million Jews in over 5 years. [More information about Auschwitz can be found on Museum & Memorial website]

My discovery of Auschwitz-Birkenau started in 2010 from the films on World War II – The Reader (2008), Life is Beautiful (1997), Anne Frank The Whole Story (2001), The Boy In The Striped Pyjamas (2008) among others & the search for truth ended 7 years later with my visit to Auschwitz-Birkenau in April 2017. Back then, I was a student in India just curious about the outside world without an inkling of the day in future that would make me a part of the European world.

In 2016, I was also deeply moved by this video (#WhatMakesUsHUMAN) on Facebook. The narrative of Francine Christophe about Bergen-Belsen Concentration Camp was more than a story of survival for me. It was a narration of the essence of humanity where life prevailed over death, humanity over barbarity, hope over despair and not to forget love over hate. Now that’s the power of words if you observe carefully. My heart was now longing to unearth the truth that was distant till now. To know why this happened!

Watch the film The Last Train To Auschwitz before visiting the camp if you want to rightly understand what did the deported people undergo in the whole process. You will give yourself a genuine chance to put yourself in their shoes. As Maya Angelou says you will forget the words & actions but never the feelings. The 45-minutes bus ride from Kraków had brought me to the site of Auschwitz I camp on a very cloudy & gloomy day. I was at the door of Auschwitz wondering if this place having lived so much terror has a bright day for a change. It was 15th of April 2017.

Visits to places of historical importance like Auschwitz-Birkenau and Anne Frank Huis are booked online three months in advance. With no prior reservation, I embarked on a day of sheer luck.  In such cases, you go as early as possible & it’s up to a Godly force to make things fall in your favor. Here’s why it was a day of sheer luck. When I reached, I saw people everywhere that I could hardly spot the counter. I don’t know if I had a really good reason to thank myself for learning French till now. Today I had one! All English guided slots were full. And there was just one slot left in a French group! Ufff! That was close!

By the time we finished our guided tour of both the camps, Auschwitz I & II, my mind was racing back & forth in fury. How could they pull up something of this sort without anyone stopping them! You will see the state of affairs in the pictures. But I would like to share three things in particular related to my visit.

WARNING! Only for the brave hearts to continue reading…

Firstly, I am going to narrate just one of the shocking truths you will encounter at Auschwitz. Showing us a picture of the arrival of the Hungarian Jews in Auschwitz II Camp, our guide asked us if we observed something strange on the picture. Owing to a total mental exhaustion due to the inputs on the intensity of horror, everyone was quiet. Pin drop silence! “Can you see the peace on the face of the people who have just arrived at a Death Camp?” was his next question. Eyebrows raised! The truth was they (the Jews) were tricked into it. They were sold fake train tickets saying they would get a better chance at life in a Labour Camp than living in ghettos after having all their wealth confiscated. They had undertaken an arduous journey in closed wagons of the train like animals. The fact that this journey was finally over at Auschwitz had brought them hope. Except it was momentary! They were all assured of the return of their belongings soon after a shower to disinfect them due to the outbreak of typhus in the camp. Especially children, weak & aged people who went in for a shower in the hope of getting some respite from the fatigue came out in the form of ashes. That’s the reason I said it was engineering of death. Everything was so cleverly fabricated till the end to make people peacefully enter the gas chambers.

Secondly, let me bring you towards the end of my visit. As I told you earlier, I was filled with terror. I could not stop myself from asking my guide how did he continue to do one of the toughest jobs on earth! He said he was working at the Museum since 15 years & that from time to time when he needed to clear his mind, he went on a break & tried to forget everything about this camp. With 5 more minutes for the bus to Kraków, standing at the bus stop, I opened my purse to see if I had something to eat as I had starved the whole day with no desire to eat after all that I had seen.

Guess what did I find in my purse! Un morceau de chocolat! For a moment, Francine Christophe appeared to be talking to me. Standing at the door of the camp, having just learned all the suffering Jews were made to go through, this chocolate had tears flooding my eyes. I had least of the hint that I would question myself if I were supposed to be that child that was born to a mother who had a miraculous luck of getting that piece of chocolate carefully preserved by another mother from France just to save her child in the worst case. Something inside me was crying also because now I knew what exactly food meant to the inmates of Auschwitz-Birkenau.

That night on my way from Kraków to Vienna, the train passed by Oświęcim. A place that has witnessed mostly horror but also hope in the end. After a day in Auschwitz-Birkenau, I wondered what the survivors might have felt after the liberation of the camp. Now that the ordeal was over, the most difficult part for the Holocaust survivors was to confront the truth of loss of their loved ones & truth of their survival from barbarity. Nothing was left. They had to go back home in a new free world that had everything but their loved ones. Everything had to be built from the scratch. The new air of freedom seemed like a new birth but not an easy one. I salute these bravest of the souls.

Another Holocaust survivor says: “Hate has no barriers. It’s everyone’s duty & responsibility to see that it does not spread.”

Can you feel the power of these words? To me, these are the people who radiate utmost human values despite being witness to the most barbaric treatment. This is the most beautiful part of their existence. No one deserves to be treated the way Jews were treated. Not even the sinful ones. Despite all this, the survivors chose peace over hatred.

Do not let your heart be carried away by hatred. Never! We have all seen together how difficult the path to a peaceful world is. Hatred for hatred is never an answer. I was born 43 years after the World War II. Even though I was nowhere concerned or affected by it in any way, upon learning the hard truth of their sufferings, I feel the humanity owes an apology to them. And also a responsibility that this shall never repeat.

Thirdly & lastly, I would like to conclude with a message on the presence of mind & responsibility. On the Holocaust Memorial Day (to commemorate the liberation of Auschwitz) this year, the 27th January 2017, the Yolocaust aj+ video went viral. Its purpose was to raise awareness on the behavior of people in places like a Holocaust museum for it is not a place of fun to take selfies or to do yoga. It is a resting place for millions of souls who were massacred. You might not fight for their justice but being respectful to their suffering is the least you can do for them!  Places like Auschwitz are frequented in millions every year. Among this crowd, you will find few such creatures I am ashamed to say. I too came across a few of them. And it’s a disgusting sight! People need to grow up! Let’s take a pledge to be travelers and not tourists! Go around the globe but learn to be responsible first!

Thanks for staying with me until the end. I also invite you to share your stories of Holocaust just because it will be another guiding story of hope & faith. As a Gift of Paris, my visit to Auschwitz-Birkenau was one of the life-changing experiences I have ever had. The main purpose to narrate this story is to spread this message I found at the entrance of one of the barracks at Auschwitz by George Santanaya: “Those who do not remember the past are condemned to repeat it.” And I will do my bit to see that never shall we let this happen again! Help someone today in a way that cannot be repaid in any kind. There! You are creating the waves of kindness.

Let’s be responsible global citizens who care for one another despite the differences we have because underneath we are all the same. HUMAN BEINGS! Let’s learn to be humans first. Then only we can build a better world for our children. We have to be the change we aspire to see. A peaceful world for everyone! Until next time!

Appreciate my words? Then let others relish it too:

Thank you for your message. Cancel reply